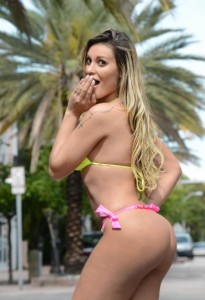 Andressa Urach, the 27-year-old Miss Butt Brazil runner-up better known as Miss BumBum, said the Real Madrid star bedded her because “he was obsessed with my butt,” according to The Sun.

The two finally took their online chatter face-to-face April 22 and Urach said: “It was incredible, his body’s perfect, like a Greek god. He went on for hours and would not stop talking about my butt.”

While Ronaldo’s reps have yet to comment on this story he tweeted that the claims are false. “I was informed that The Sun, faithful to its editorial line, will publish an article where is given voice to a so called Andressa,” he wrote, “someone seeking the limelight on my account. And I wonder why this happens one day before a very important game for my team.”

Uhhh “According to an explosive report.” Yea right. This 100% happened- and it doesn’t qualify as explosive. Is anyone surprised? I assumed this was par for the course with soccer stars. OH, he was obsessed with your ass? Who would’ve thought!? You were only runner-up in the best ass contest.. in the country with arguably the best asses in the world. Damn, sluts! Take it on the chin and take a hike, babe.