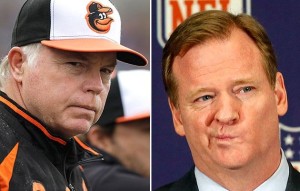 As previously mentioned, the NFL schedule has been released and the Super Bowl champion, Baltimore Ravens, won’t have the opportunity to open the season in Baltimore. The Baltimore Orioles have a home game scheduled for September 5th against the White Sox, and the two teams share a parking lot.

Rex Ryan: “Well, who really cares? You’ve got 81 at home, maybe you could have done the right thing and given one up and then played 82 on the road and then 80 at home,” he said. “I really don’t think people are going to care about that game.”

“You have a chance to have the defending world champs open up the season at home where they rightfully should. That’s unfortunate,” the Jets’ coach added.

Granted, Rex Ryan has other matters to address. That said, he is spot on with his disapproval of the Orioles refusing to move a home game to accommodate the Ravens. The Super Bowl champ is always rewarded by getting to open the season at home, in front of their fans, as sort of a final celebration of their accomplishment. Its always special for the team, city, and fans. I find it unreasonable for the Orioles to not change this game. Reschedule the game if possible, play the game at an alternate ballpark, hell play it in Chicago if you have to. The Super Bowl champs takes parking lot privileges 100 times out of 100. Let them have their day. They won the fucking Super Bowl for Christ’s sake. The only thing I can think of is there is some deep resentment between the two organizations. Otherwise, help a brother out. Not a good look for the O’s IMO.