SC: Investigators from the IRS and the Department of Homeland Security searched the home of James Pepion, the man behind @suppliedpdx and Get-Supplied.com, on April 6, seizing 1,560 pairs of Nikes, 40 pairs of adidas, and seven pairs of Asics.

According to KOIN6, the investigation was initiated by Nike, who began looking into Pepion’s business on March 5. Investigators found that Pepion’s PayPal account for his business received a total of $2,615,988 since 2012, with many comments attached to transactions calling the sneakers he sold fake.

He is accused of selling fake, unauthorized, and grey market sneakers produced outside of Nike’s partnered factories.

A search warrant reveals that federal agents intercepted packages sent to Pepion’s home in Happy Valley, Ore. Of 17 searches performed, agents found that all but one package contained counterfeit goods. Google was served with a search warrant during the investigation, the resulting inquiries connecting Pepion to a Chinese national suspected of organizing the theft and sale of sneakers from factories.

Don’t hate the player, hate the game! As the sneaker industry continues to go grow to astronomical levels, the production of fake, unauthorized shoes will also blossom in lockstep. Case in point, James Pepion; who has made over $2.5 MILLION since 2012 by selling knock-off Nikes and the like.

Does it suck that there are so many fakes on the market, making it nearly impossible to distinguish a fugazzi pair of kicks from the real thing? Sure. But I’ll be a monkey’s uncle if I’m going to sit here and hate on someone for taking advantage of all these jabronis who would optimistically send hundreds, sometimes thousands, of dollars to a website that had a full-size run of nearly every recent Air Jordan release. Fucking Foot Locker doesn’t even have that many pairs in stock why in the world would a website with a goddamn “-” in their URL?

I’m not saying what he did was right- duping people into believing that they’re buying authentic sneakers is a scummy thing to do. But if people are naive enough to send you millions of dollars for sneakers that they’ve only seen on the internet, then so be it. That’s the American way, after all. Snake it til you make it.

And I’m seeing a lot of folks on sneaker twitter rejoicing from their ivory towers today because of this news, but the reality is they’d all do the same thing in a heartbeat if they had THE PLUG.

Look at these idiot morons: 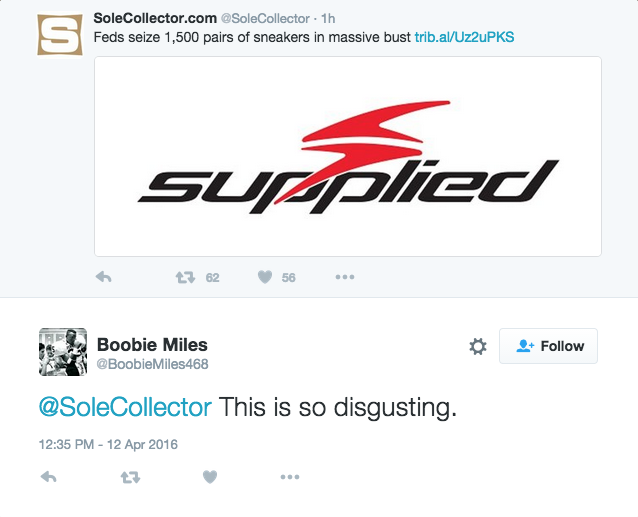 DING DONG THE WITCH IS DEAD! Boobie Miles is SO DISGUSTED! Mickey E wants a MINIMUM of 50 YEARS! John Doey is praising THE LORD!!! Give me a break.

I could go down to Canal Street right now and fill up a truck with all of the flimsy Air Max 95s on display, but does it make me a bad guy if I post those sneakers on this site and people want to send me cold hard internet bitcoins for them? If the answer is yes, then I am perfectly fine with being a bad guy. The bad guy with $2.5 Million dollars in his PayPal account…

…Until the FBI raids my home and seizes my entire life, but as my great grandmother once sang to me, “Scared money don’t make no money.”