Emmanuel Sanders went on the Dan Le Batard Show for an interview today and disrespected beyond belief. I’ve never heard anything like it.

First, Le Batard had the audacity to ask Emmanuel how he felt about Lisa Ann saying he’s the #1 player on the Broncos that she’d want to “cook dinner for.” What a complete asshole! Isn’t this a sports show? How about some x’s and o’s talk? How about we talk about that one slant route? Or what about the film study prior to the big game? That’s what the viewers really want. Shame.

But Le Batard wasn’t done there. He further insulted Emmanuel Sanders by forcing him to play a horrific game of “Does Wade Philips look like he could be a guy on a bottle of BBQ sauces” and “Does Gary Kubiak look like an Aspen ski instructor.”

An all-time disrespectful interview. Thankful that I don’t have children because how would I explain this to them? Really feel sorry for the viewers though, #WheresTheRespect ? 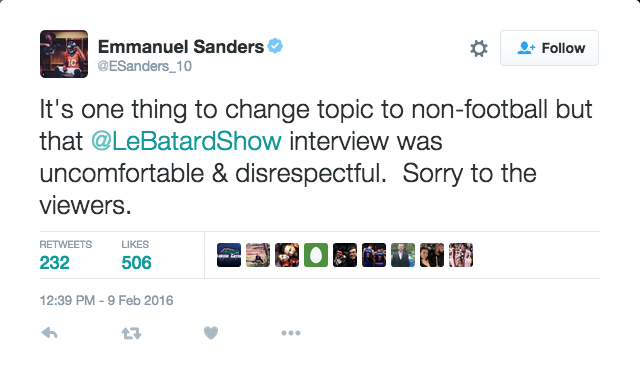 Kidding aside, I fucking hate the Dan Le Batard Show, specifically his father who irritates me more than a jellyfish sting under my nutsack.

That said, Emmanuel Sanders is a fool for thinking he wouldn’t have to answer some silly questions on the show and an even bigger loser for crying about it on twitter afterward.