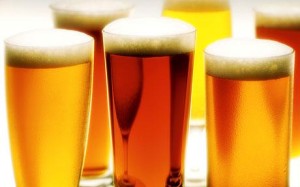 HuffPo: Joaquín Alcaraz Gracia claimed the title of beer drinking champ during a festival in Spain Wednesday, but his victory was short-lived. The 45-year-old man died after the beer drinking contest, during which he reportedly consumed six liters of brew (about 12.5 pints) in 20 minutes. According to local reports, Gracia won the drinking festival’s top prize and hoisted his trophy into the air. But the event, held in the Gea y Truyols district of Murcia, took a tragic turn soon after when Gracia began to vomit and didn’t stop.
Bravo.

I respect the shit out of Joaquin Alcaraz Gracia, I really do. But, this is one of those things where you win, but the person who wins isn’t really winning. Understand? Bottomline, there are no winners in the competitive speed drinking circuits.

Lets say for example, I dont know, that time in college when your roommates have a Captain Morgan’s bottle race. First to finish wins. And the guy who wins by finishing his bottle first, starts puking everywhere, cant stand up straight, falls on his desk, catches himself with his chin, passes out in the hallway, and eventually gets kicked out of college. I seent it!

Exactly the same as Joaquin, except my roommate just briefly enrolled at another college before getting accepted again and ultimately going on to live a successful life. Joaquin just went into cardiac arrest and died.