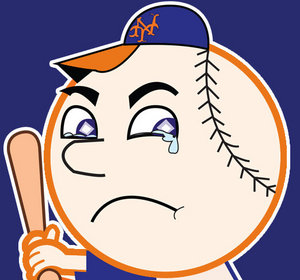 Newsday: Collins said the Mets saw signs of possible pitch tipping in Atlanta during Wheeler’s major-league debut. But in that case, Collins said Wheeler made good enough pitches with his fastball to get away with it. Collins noticed that the White Sox kept at-bats alive by fouling pitches off, another telltale sign that Wheeler might have sabotaged his chances.

However, Wheeler said he wasn’t aware during the game that he was tipping his pitches. Collins said that the Mets hesitated to ask Wheeler to make major changes in the middle of a game for fear of making the problem worse.

Heard this on Boomer & Carton this morning, and those are some of the direct quotes from the Newsday article. So the word is out that in his first two starts, Wheeler has been tipping his pitches. As Ron Darling pointed out in his outing against the White Sox, he slows down his wind up when throwing his off speed stuff. It’s a subtle tell, but something that the opposing teams have certainly picked up on. And the Mets picked up on it in his first start in Atlanta. Except they chose not to tell him about it!

For reasons nobody can ever know about, the Mets knew their young pitcher was tipping his pitches and chose not to correct it. Not during the first game, not during his 5-days rest, and not during the second game when he really struggled. Not until Ron Darling opened his mouth did the Mets claim to have noticed this issue. Hey guys, maybe that’s something the coaches should address. You know, considering you’re coaches and all, you might want to coach. The excuse that Dan Warthen and Terry Collins didn’t want to make the problem worse is ludicrous. What can be worse than telling the batter what you’re going to throw? Nothing, so you might as well do your job and tell him to cut that shit out. He’s only our future 1A behind Harvey. Just a thought…