The smartest, coolest, most badass dog in the history of showbiz. A question that’s plagued society since the merger. What’s the merger, you ask? Like anyone can even know the answer to that. It’s just a reference to a time long before ours- when men were men, and sheep were scared; and the debate was just as fierce as it is today. 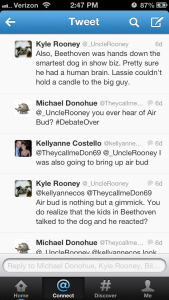 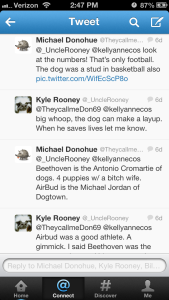 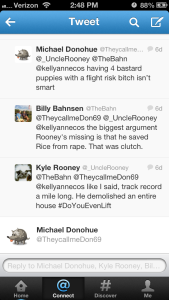 I’ve taken the liberty to narrow it down to three candidates. No cartoons- so that pothead Scooby-Doo, Clifford’s big red ass, and that pompous runt Porckchop are fucking out.

It comes down to Lassie, AirBud, and Beethoven. In short: A bitch, a gimmick, and a boss. I’ll break it down further for those of you who are still torn. 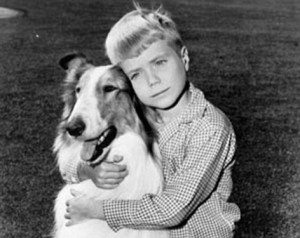 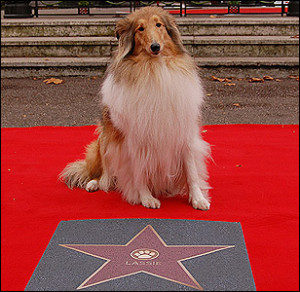 Quick fact: I wasn’t born in the 1950’s. With that, I had to do some investigative research into Lassie’s past. She was the pioneer of dogs as far as show business goes, and was America’s bitch from 1954-73 when her television series aired.

All in all, I gave up my research after approximately six minutes because I think she just barked when her owners were in trouble and then just did regular dog shit. Bored me to tears. Thanks for coming out, Lassie. 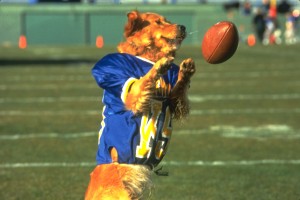 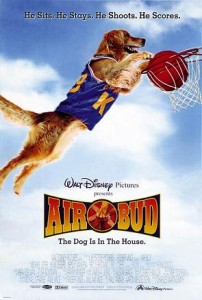 Guess what? I never even saw any AirBud movie because why would I. Any mutt at the park can catch a frisbee. I read the plot though, because I like to be thorough in my research. Apparently, Buddy can shoot a ball into a hoop and people lose their shit. Yeah, that’s sweet I’m not going to lie to you.

But as far as tricks are concerned, that’s all this pooch is, a circus act. He catches balls, and can fucking dunk I guess. Doesn’t really do anything other than be a freak athlete. Meat Head City. As the subtitle indicates; He sits. He Stays. He Shoots. He scores. Cool story. That’s not going to cut it when you’re running for king doggie of Hollywood. It’s called versatility, ever heard of it? 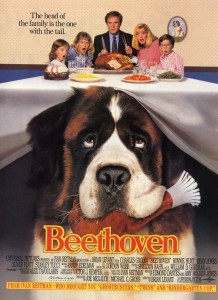 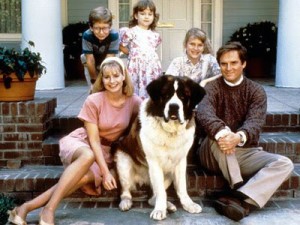 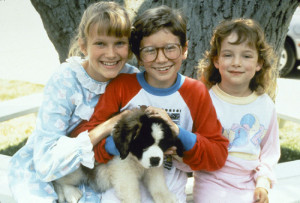 The clear cut winner. Smartest, coolest, most badass dog in show biz. Beethoven. I’m pretty sure he had a human brain. The Newton family vented to him and he reacted. Protector, great listener, lover, father, vigilante, matchmaker, hamburger eating contest champion, the list goes on. Track record a mile long, dog absolutely brings the thunder everyday of his life.

First off, he escapes from the bad guy’s van as a fucking puppy. Couldn’t even lift his leg yet and he’s jumping out the back of a van like a superhero. He listens to Ryce* bitch about how ugly she is. “Whatsup Ryce*, can’t get a boyfriend on your own? No problem, I’ll just break the ice and get you on the fast track to the cool kids table. You’ll be the slut of your dreams in a jiff!” He picks up a stick, brings it over to her crush, and drags the boy back to her so they can fall in love. In a similar situation, AirBud would’ve just tried to play fetch, like a selfish dick jock.

Next, he saves that pussy Ted from getting his ass kicked, because like any loving protector he’s always got his head on a swivel. Doesn’t even want credit for it either, as he hides behind the bushes afterwards. Humble as fuck. Also, remember when that little rascal Emily almost fucking drowns in the pool? This girl was on the verge of death, and Beethoven jumped in the pool and swam her to safety. No need for a nanny when the B-Man is patrolling the yard.

Lastly, he goes IN on the bad guys at the end, resulting in their indictment and saving the entire Newton clan. My heart is pounding through my ears right now! Not satisfied? Can’t remember what he did for an encore?

Umm I don’t know maybe he just saves Ryce from getting raped, demolishes the kid’s entire house, wins a hamburger eating contest saving that wastoid-shitbag George Newton from humiliation, rescues his puppies and his girlfriend Missy, sends the bad guys up the river, and ultimately stays with his family like the stand-up dog he is. 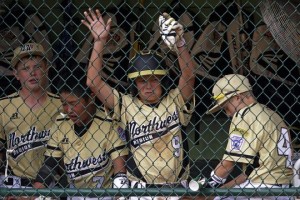 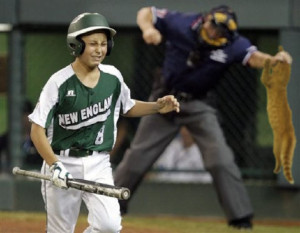 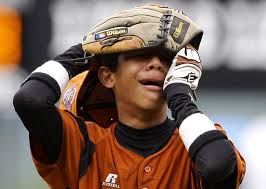 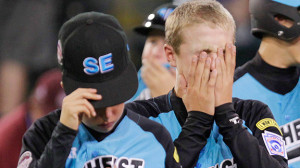 Note: This post may come off as being an insensitive, machismo rant. And it is.

The little league world series wrapped up on Sunday and the Japanese team won it all. Congrats to them. Just kidding, who gives a shit.

The bigger issue at hand is the amount of crying that goes on during the LLWS. Crying, pouting, sobbing, bitching, whimpering, sulking, yadda yadda yadda. I’m not even talking about after a tough loss in the biggest game of their lives either. Because that could be devastating, although I wouldn’t know because I don’t think my team came in anything other than first place growing up. Nighthawks, bitch.

I’m speaking on the type of shit that routinely happens after an error or a strike out. These kids are 12-13 years old; that’s like 8th fucking grade. Have a little pride boys. Not like you’re on national television or anything. At least try to not be a total jellyfish in front of planet Earth. At the very least keep your composure for 10 seconds and then go HAM on an entire box of Kleenex, if thats your thing. I’ve got to believe that if I fathered one of these crybaby wastoids I’d be leaving them in Williamsport.

Maybe it’s because I was too busy winning championships and hanging banners at the local little league field as a kid to understand it all, but I just cant wrap my brain around all the hysterics. I mean, that’s got to be it. I was just too accustomed to pissing excellence and collecting trophies to ever fathom crying on a baseball diamond.

With that, it’s probably time to lay the groundwork for my Little League workshop. Like when rookies in the NFL, NBA learn how to not do drugs and solicit whores on road trips. Except, we’ll focus on not crying and tarnishing your family name.

Either way, I know I’m in the majority when I say these kids need to keep their waterworks in check. If you’re going to completely lose your shit after bobbling a ground ball just wait until next year when your summer antics have gone viral and O’Doyle buries your deadass in the High School cafeteria. Please, get a grip fellas. And if you get hit by a pitch, for Christ’s sake, don’t rub it. This isn’t RainbowLand.

PS- Just noticed the ump in the top right picture is holding a cat, and it is amazing.

NYDN: A hapless Polish farmer who brought a cute puppy to look after his sheep was shocked to find out it was actually a wolf. Zbigniew Pieczyk, 50, was left red-faced after discovering the adorable stray he found near his ranch in Podlasie was in fact a dangerous wild dog. “I thought it was a sheepdog pup or a German shepherd,” Metro reports him as saying.

“Then when it started to howl every night I realized I’d made one hell of a mistake and I called the police,” he added. He is now set to be returned to the wild.

That’s a wolf brotha! The story is so, “Polish-people-are-so-dumb” that I don’t know if I can believe it. This Polish dunce is in competition for worst farmer ever with this guy.

What’s that old saying? Don’t bring a wolf into your farm to guard your sheep because that wolf really wants to eat the sheep, and will probably team up with other wolves to slaughter your herd? Yeah that one, that’s the one that applies here.

Zbigniew Pieczyk’s entire herd is completely fucked now. Let me explain to you how this works: Mother wolf is furious that she can’t find her cub. The cub howls repeatedly during the night, allowing the now batshit crazy mother wolf to locate the baby. The cub gets released into the wild, reunites with mom, and the streets run red with lambchop’s blood. Classic cause-and-effect scenario. 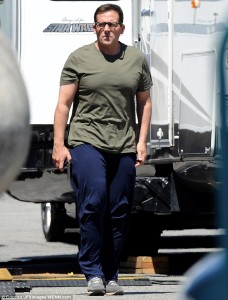 Apparently he’s preparing for a new role as the most pissed off human on planet Earth, “Alexander And The Terrible, Horrible, No Good, Very Bad Day”. AKA- the 40 year-old virgin, who did steroids, kind of got bitch tits, but definitely is still a pissed off virgin. Kind of has an Oswalt Cobblepot scowl, but he’s diesel like Shwarzenegger. Not even going to google the Arnold’s name, I think I nailed it first try.